Poet Nikki Giovanni will bring the keynote presentation for the UW-Madison Black History Month Celebration on Wednesday, Feb. 15 at 7 p.m. in the Symphony Room of Gordon Commons, 770 West Dayton Street. The world-renowned poet, writer, commentator, activist and educator, who has been a longstanding image of culture and joy in the Black community, will address the 2017 celebration theme of  “Black Joy: Getting Black to Happy, A Celebration of Resilience & Resistance at the University of Wisconsin-Madison.”

Giovanni is one of the best-known African-American poets who reached prominence during the late 1960s and early 1970s, which led to her selection as a key speaker by the student Black History Month Committee.  She will explore the idea that even though people of color have had many challenges to face in the past, they still have a right to be happy and celebrate joy.

“The goal of the Black History Month Planning Committee for the 2017 calendar was to promote self-care as a radical act for Black people and people of color,” said Alexis Coleman, Black History Month Planning Committee Co-Chair. “We wanted to do this by facilitating open discussions about reclaiming joy and creating spaces for interactive healing.”

Giovanni’s unique and insightful poetry testifies to her own evolving awareness and experiences: from child to young woman, from naive college freshman to seasoned civil rights activist, from daughter to mother. Frequently anthologized, Giovanni’s poetry expresses strong racial pride and respect for family. Her informal style makes her work accessible to both adults and children. In addition to collections such as Re: Creation (1970), Love Poems (1997), and The Collected Poems of Nikki Giovanni (2003), Giovanni has published several works of nonfiction, children’s literature and recordings, including the Emmy-award nominated The Nikki Giovanni Poetry Collection (2004). A frequent lecturer and reader, Giovanni has taught at Rutgers University, Ohio State University, and Virginia Tech. 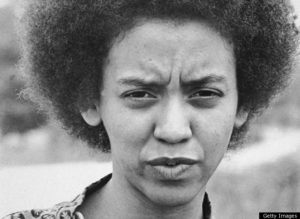 Giovanni was born in Knoxville, Tennessee in 1943, the younger of two daughters in a close-knit family. She gained an intense appreciation for her African-American heritage from her outspoken grandmother, explaining in an interview, “I come from a long line of storytellers.” This early exposure to the power of spoken language influenced Giovanni’s career as a poet, particularly in her propensity towards colloquial speech. When Giovanni was a young child, she moved with her parents from Knoxville to a predominantly black suburb of Cincinnati, Ohio but remained close to her grandmother. Giovanni was encouraged by several schoolteachers and enrolled early at Fisk University, a prestigious, all-black college in Nashville, Tennessee. A black renaissance was emerging at Fisk, as writers and other artists of color were finding new ways of expressing their distinct culture. In addition to serving as editor of the campus literary magazine and participating in the Fisk Writers Workshop, Giovanni worked to restore the Fisk chapter of the Student Non-Violent Coordinating Committee (SNCC). Giovanni graduated with a B.A. in history in 1968 and went on to attend graduate school at the University of Pennsylvania and Columbia University in New York

If Black History Month is not
viable then wind does not
carry the seeds and drop them
on fertile ground
rain does not
dampen the land
and encourage the seeds
to root
sun does not
warm the earth
and kiss the seedlings
and tell them plain:
You’re As Good As Anybody Else
You’ve Got A Place Here, Too

Giovanni’s first published volumes of poetry grew out of her response to the assassinations of such figures as Martin Luther King, Jr., Malcolm X, Medgar Evers, and Robert Kennedy, and the pressing need she saw to raise awareness of the plight and the rights of black people. Black Feeling, Black Talk (1967) and Black Judgement (1968) display a strong, militant African-American perspective as Giovanni explores her growing political and spiritual awareness. These early books, followed by Re: Creation (1970), quickly established Giovanni as a prominent new African-American voice. Black Feeling, Black Talk sold over ten thousand copies in its first year alone. Giovanni gave her first public reading to a packed audience at Birdland, the famous New York City jazz spot. Critical reaction to Giovanni’s early work focused on her more revolutionary poetry. Some reviewers found her political and social positions to be unsophisticated, while others were threatened by her rebelliousness.  Writing  about what she knows, sees, experiences, critics of the time noted her ability to convey urgency in expressing the need for Black awareness, unity, and solidarity.

In 1969, Giovanni took a teaching position at Rutgers University. That year she also gave birth to her son, Thomas. Giovanni’s work shifted  focus after the birth of her son and she made several recordings of her poetry set against a gospel or jazz backdrop. In addition to writing her own poetry, Giovanni offered exposure for other African-American women writers through NikTom, Ltd., a publishing cooperative she founded in 1970. Gwendolyn Brooks, Margaret Walker, Carolyn Rodgers, and Mari Evans were among those who benefited from Giovanni’s work. Travels to other parts of the world, including the Caribbean, also filled much of the poet’s time and contributed to the evolution of her work. As she broadened her perspective, Giovanni began to review her own life. Her introspection led to Gemini: An Extended Autobiographical Statement on My First Twenty-five Years of Being a Black Poet (1971), which earned a nomination for the National Book Award. 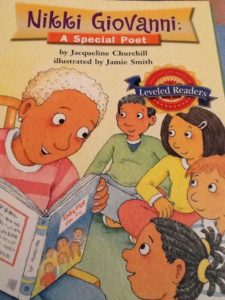 In addition to writing for adults, during the early 1970s, Giovanni began to compose verse for children. Among her published volumes for young readers are Spin a Soft Black Song (1971), Ego-Tripping and Other Poems for Young People (1973), and Vacation Time (1980). Written for children of all ages, Giovanni’s poems are unrhymed incantations of childhood images and feelings which also focus on African-American history and explore issues and concerns specific to black youngsters. Giovanni’s later works for children include Knoxville, Tennessee (1994), The Sun Is So Quiet (1996) and Lincoln and Douglass: An American Friendship (2008). Giovanni’s children’s book Rosa (2005) was awarded a Caldecott Medal and the Coretta Scott King Award for illustration.

Throughout the 1970s and 1980s Giovanni’s popularity as a speaker and lecturer increased along with her success as a poet and children’s author. She received numerous awards for her work, including honors from the National Council of Negro Women and the National Association of Radio and Television Announcers. She was featured in articles for such magazines as Ebony, Jet, and Harper’s Bazaar. She also continued to travel, making trips to Europe and Africa, and her increasingly sophisticated and nuanced world view is reflected in her work from the period. As Giovanni has moved through her middle years, her work has continued to reflect her changing concerns and perspectives, works spanning the first three decades of her career, reveal the evolution of Giovanni’s voice and charts the course of the social issues of gender and race, along with subjects as diverse as friendship, sexual desire, motherhood, and loneliness.

Giovanni continues to supplement her poetry with occasional volumes of nonfiction, including Racism 101 (1994), in which she looks back at her experiences of the civil rights movement and its aftermath. The book is a rich source of impressions of other black intellectuals, including writer and activist W.E.B. DuBois, writers Henry Louis Gates, Jr. and Toni Morrison, Supreme Court Justice Clarence Thomas, and filmmaker Spike Lee. Giovanni’s crossover from the 20th to the 21st century after a battle with lung cancer returns to her love of poetry laced with doses of harsh reality, a mix of socio-political viewpoints, and personal memories of loss, then moves on to anecdotes, musings, and praise songs, including an audio compilation.

Giovanni has published no fewer than five books of poetry in the ten years since 1999 in a consistent demonstration of her  “outspoken advocacy, her consciousness of roots in oral traditions, and her charismatic delivery place her among the forebearers of present-day slam and spoken-word scenes”, according to Publishers Weekly.  Giovanni is an avid supporter of slam, spoken-word and hip-hop, calling the latter “the modern equivalent of what spirituals meant to earlier generations of blacks.”

Giovanni has received numerous awards and accolades for her work including multiple NAACP Image Awards, the Langston Hughes Award for Distinguished Contributions to Arts and Letters, the Rosa Parks Women of Courage Award and over twenty honorary degrees from colleges and universities around the country. Giovanni has even had a species of bat named after her, the Micronycteris giovanniae. Giovanni taught at Virginia Tech during the tragic shooting in 2007 and composed a chant-poem which she read at the memorial service the day after. Of the poem, Giovanni said in an interview with the Virginian-Pilot “I try to be honest in my work, and I thought the only thing I can do at that point—because all I knew was that we are Virginia Tech. This was not Virginia Tech.”

“Writing is … what I do to justify the air I breathe,” Giovanni wrote, explaining her choice of a vocation in Contemporary Authors. “I have been considered a writer who writes from rage and it confuses me. What else do writers write from? A poem has to say something. It has to make some sort of sense; be lyrical; to the point; and still able to be read by whatever reader is kind enough to pick up the book.”