Students, faculty, and staff at the University of Wisconsin–Madison are encouraged to take advantage of the many virtual and in-person opportunities in Dane County this week in celebration of Juneteenth. The holiday commemorates when U.S. troops liberated nearly 200,000 Black Texans on June 19, 1865, bringing freedom to the last enslaved people in the former Confederacy more than two years after the Emancipation Proclamation was signed. It’s a celebration of freedom and African American history, culture, and progress.

“Juneteenth is a celebration of freedom and marks an important moment in American history. We are proud to be a part of our community celebrations which promote unity, pride and awareness,” said Cheryl B. Gittens, UW–Madison interim deputy vice chancellor for diversity & inclusion and chief diversity officer. “I encourage everyone in the UW–Madison community to participate in the events being offered this week by the Kujichagulia Center and other community organizations as we come together to celebrate and reflect.” 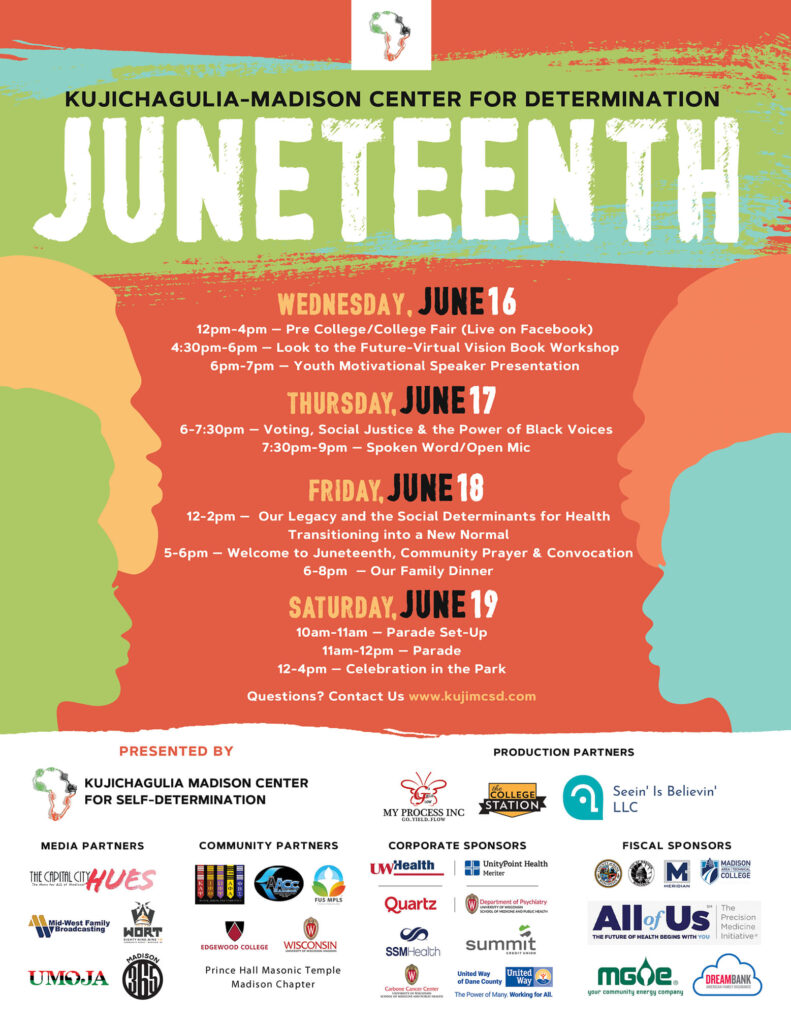 The Kujichagulia Madison Center for Self-Determination, a nonprofit organization that promotes African American cultural and educational events, has organized and hosted Madison’s Juneteenth celebration for more than 30 years. The University of Wisconsin–Madison is proud to sponsor Kujichagulia’s Juneteenth events, which this year will run from June 16-19 with the theme “Black Resilience: Rising from the Ashes.”

In partnership with Kujichagulia, following the parade and celebration in Penn Park on Saturday, the Wisconsin Union’s Wisconsin Union Theater will feature Milwaukee singer-songwriter Donna Woodall at 7 p.m. and renowned trumpeter, composer and bandleader Marquis Hill at 9 p.m. at the Memorial Union Terrace as part of the annual Madison Jazz Festival.

More information about registering for the Kujichagulia Center’s virtual and in-person events can be found here.

The history of Juneteenth

The Emancipation Proclamation, signed by President Abraham Lincoln on January 1, 1863, declared freedom for the millions of enslaved people in areas under Confederate rule. However, it wasn’t until the victory of the U.S. over the rebellion in the spring of 1865 that the great majority of African Americans could confidently assert that freedom.

Even after the war ended, slavery persisted in Texas. There, sheltered by distance from federal authority, slaveholders refused to acknowledge the new reality. It was only the arrival of U.S. troops that ended the slaveholders’ power and brought freedom to nearly 200,000 Texans.

Juneteenth (also known as Freedom Day, Jubilee Day, Liberation Day, and Emancipation Day) celebrates the official proclamation of that freedom by Major General Gordon Granger on June 19, 1865. Black Texans first celebrated the anniversary in 1866, and as the descendants of formerly enslaved Texans spread across the U.S. in the years that followed, they brought the tradition with them. The holiday was first officially recognized by the state of Wisconsin in 2009.

The Juneteenth flag was created in 1997 by Ben Haith, founder of the National Juneteenth Celebration Foundation, and revised in 2000 and 2007 to become the flag that is displayed around the country today. The flag depicts a star surrounded by a nova in the red, white, and blue of the American flag, representing a new beginning and the true realization of the freedoms laid out in the Declaration of Independence.