Joy Harjo, the current U.S. poet laureate and the first Native American to hold that title, will lecture and read from her works at noon on Monday, Oct. 12, as Montana State University celebrates Indigenous Peoples Day 2020. The virtual lecture is free and open to the public.

Harjo, a member of the Muscogee (Creek) Nation, was appointed by the Library of Congress as the 23rd poet laureate of the United States in 2019, and she was reappointed for a second term that began Sept. 1. 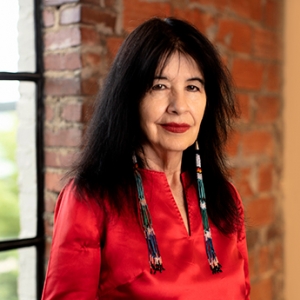 Joy Harjo, U.S. poet laureate, will lecture and read from her works at noon on Monday, Oct. 12, as MSU celebrates Indigenous Peoples Day 2020. The virtual lecture is free and open to the public.

President Waded Cruzado said the university was honored to welcome Harjo, a giant in American letters, to MSU’s celebration of Indigenous Peoples Day.

“On all days, but particularly on this occasion, we come together and recognize the ancestral holdings upon which our university is located and will recognize that, although we are specific and distinct peoples, we are united in one MSU community.”

Harjo has said she has dedicated her career to making Native people and their stories visible, exploring tribal histories, spirituality and feminist issues in nine collections of poetry. Harjo’s memoir “Crazy Brave” won the PEN USA Literary Award for creative nonfiction and the American Book Award. She is the recipient of the Ruth Lilly Prize from the Poetry Foundation for lifetime achievement, the 2015 Wallace Stevens Award from the Academy of American Poets for proven mastery in the art of poetry, a Guggenheim fellowship, the William Carlos Williams Award from the Poetry Society of America and a United States Artists fellowship. Also a musician, Harjo performs with her saxophone nationally and internationally, solo and with her band, the Arrow Dynamics. She has recorded five award-winning CDs of music. She lives in Tulsa, Oklahoma.

During her first year as poet laureate, Harjo focused on expanding her digital presence, connecting with other Native poets and highlighting the intersection between music and poetry. She has said her second term will focus on a project called “Living Nations, Living Words: A Map of First Peoples Poetry,” a digital, interactive map featuring contemporary Native poets, including videos of them reading their work, that will be added to the Library of Congress.

Marsha Small, a member of the Northern Cheyenne Nation and a doctoral student in Earth sciences who helped launch Indigenous Peoples Day in Bozeman in 2016, said she hopes the event will lead to a better understanding.

“People are so intent in believing in one paradigm, and there are multiple paradigms,” Small said.

Harjo’s lecture is sponsored by the Department of Native American Studies, the MSU University Speakers Committee, the MSU Library and the colleges of Agriculture; Arts and Architecture; Education, Health and Human Development; Engineering; Letters & Science; and Nursing.

For more information about MSU’s celebration of Indigenous Peoples Day, contact Nicholas Ross-Dick at ned@montana.edu or 406-994-5529.