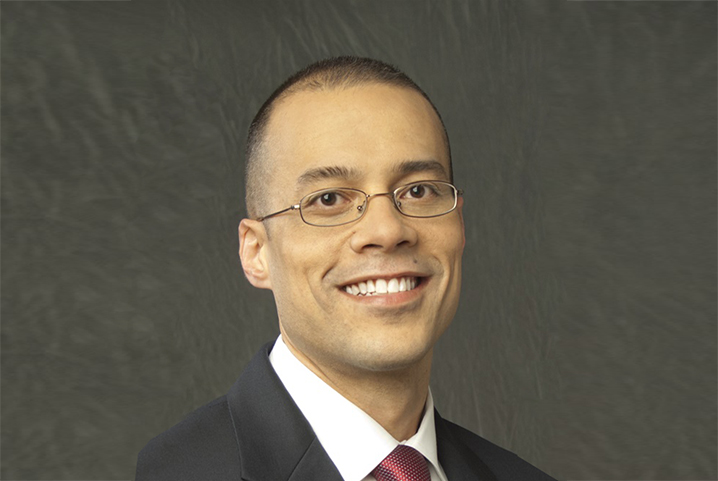 When the clock hits midnight next December 31 and 2020 begins, Justin Cruz ’96 will start his third decade in a position of authority at American Family Insurance, marking one of the most impressive ascents that an executive of color has made in Madison.

“You don’t always plan to stay in one place so long, but sometimes it just sort of happens, if you love the company,” Cruz says with a laugh, reflecting back on his 18-year career at American Family. His tenure at AmFam has culminated in his becoming the company’s chief diversity officer and one of its most influential and powerful voices.

The rise to the top of a major company can be a steep climb for would-be executives — people of color in particular. Even as companies seek to be more diverse and more inclusive, the challenges for people of color can be profound — which is what made it so special for Cruz when CEO Jack Salzwedel called him into his office late last November.

“He said he had been thinking for some time, as we’ve been progressing our commitment toward diversity and inclusion, that he wanted to make that an executive role,” Cruz recalls. “So I don’t report through the typical HR type of people administratively. He really wanted to have this function closer to him in order to give it his direct championship, influence, and commitment. And so I report to his chief of staff.”

For Cruz, the decision validated the steady work he had demonstrated over his lengthy tenure, which began in 2001, when he joined the company as an actuary.

“No matter what you do in an organization, you’ve got to demonstrate success in your field,” Cruz says, “demonstrate that you can get work done. You can build a plan and build a team and execute on that. Second, being a person of color in corporate America — and maybe someday it’ll be less true as companies build thriving, diverse, and inclusive environments — but historically you’re going to get tapped to be a part of anything around diversity and inclusion. So for a long time I’d had involvement in this space. Being part of helping run business groups or councils, voluntary commitments, being asked to speak to a group. I also spent four years leading our Adopt-a-School. So I think it was demonstrating the ability to work.”

The Adopt-a-School program is run by the Foundation for Madison’s Public Schools and partners businesses with schools as sponsors. Cruz has led American Family’s partnership with East High School to address the needs of students there and add resources to East.

“It’s a relatively new thing for us,” Cruz says of American Family’s involvement. “We’ve been a big community player for years in other ways, but Adopt-a-School was new maybe five or six years ago. We began a partnership with Sherman Middle School after [current Madison chief of high schools] Mike Hernandez came and took over that school. We did that and we really enjoyed it. Our employees really were engaged in that just helping out with kids. It was just a really fulfilling and rewarding experience, and then when Mike moved to East, it triggered the idea that we could sponsor East. So that’s when I jumped on board. And then last fall we began a partnership with Lakeview Elementary. We wanted schools that were diverse, that had challenges economically, and [that] were on the east side of Madison” — near American Family’s corporate headquarters.

A Stint in Education

Working with kids in challenging situations was actually Cruz’s first job after graduating from the University of Wisconsin with a degree in education. Cruz moved to Milwaukee to teach mathematics at the bilingual South Division High School.

Cruz said that was a particularly trying time in the history of both the city and the school. Gangs, bad home situations, and economic challenges were part of many of his students’ daily existence.

“They were dealing with a lot,” Cruz says. “It’s hard for kids to bring their whole selves to school every day and concentrate when [there are]’s so many factors in their lives. And, unfortunately, the schools suffer the consequences to that.”

But after a few years, Cruz decided to make a career change. With a baby on the way and most of his and his wife’s family back in Madison, he decided it was time to return. Cruz received his master’s degree in mathematics from the University of Wisconsin–Milwaukee and became an actuary at American Family.

Looking back, Cruz says his time at UW–Madison was the perfect precursor for joining corporate America as a person of color. When he first arrived on campus, he could see immediately that the school was almost totally white.

“Part of it is, you are a product of your environment, and so they have to work very hard to create a welcoming environment on a campus that is predominantly white. And a lot of the diversity they do have is from students abroad,” Cruz says.

While at the UW, Cruz was part of the Chancellor’s Scholars Program, which was founded by former assistant vice chancellor Mercile Lee in the ’80s. The program aims to attract academically outstanding students who reflect the diversity the UW seeks. Scholars who meet academic expectations receive a full-tuition scholarship.

Lee was a mentor and a guiding force for people of color in Madison. She won multiple humanitarian awards, and Cruz credits her for much of his collegiate success.

“I had the luxury of being a Chancellor’s Scholar,” Cruz says. “Mercile Lee was a wonderful woman who helped change my life along with many other scholars of color. So a big part of my college experience was that program.”

Today, Cruz is helping American Family enter the next decade as a company at the forefront of inclusive practices. American Family is beginning to strengthen its presence in the Milwaukee area and plans to establish an office there that will house the company’s regional functions. The location should help attract talent of color and diversify the workforce.

“I’m pretty psyched about the things we’re doing here,” Cruz says. “We’re making some big strides on the diversity and inclusion side. That’s a luxury and an honor. Not every chief diversity officer is blessed with the level of support and commitment that we have right now. We’re trying to change the culture. At American Family, we’re trying to be an employer of choice for diverse talent.”

By Nicholas Garton for the Wisconsin Alumni Association