Politics and social structures tend to divide us, but our shared reverence for the land and its history can be the bond that unites us, Samantha Skenandore, a member of the Ho-Chunk Nation, told a large campus crowd Monday.

Skenandore invited audience members to picture the land as it once was, with wigwams up and down the Isthmus and a gathering space for international council meetings of tribal leaders near today’s Wisconsin State Capitol. She highlighted the many Indian effigy mounds on campus and reminded students that when they walk up Bascom Hill, they pass an ancient graveyard.

“These spaces are sacred,” said Skenandore, an attorney and alumna of UW–Madison. “They were meant for you to go to them, to sit next to them, to think and grow and be part of them and take them in.”

Skenandore, a former associate justice for the Ho-Chunk Nation Supreme Court, spoke to about 1,000 people at Shannon Hall in Memorial Union as part of the Wisconsin Union Directorate’s Distinguished Lecture Series. 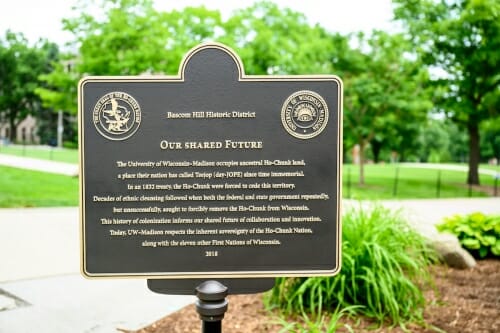 The “Our Shared Future” plaque is pictured on Bascom Hill in June 2019. PHOTO: BRYCE RICHTER

Her talk served to launch more than a year of special campus events related to a new heritage marker on Bascom Hill titled “Our Shared Future.” The marker, dedicated in June, acknowledges the land as the ancestral home of the Hoocągra (the Ho-Chunk people), who call the area Teejop (day-JOPE, meaning “Four Lakes”).

The marker will spend the rest of this year and 2020 traveling around campus to heighten awareness of it before returning to Bascom Hill. Monday night, it was on display in the lobby of Shannon Hall.

Skenandore’s lecture also served as UW–Madison’s commemoration of Treaty Day, named for the Treaty of 1832, which was signed on Sept. 15 of that year. It forced the Ho-Chunk to cede territory that is now the UW–Madison campus.

“I am here to tell you that the land we talk about today was stolen,” she said. “This is how colonial dominance works. You divide and conquer. You take the land. You instill fear. You force assimilation. You take control of their cultural identity. And when you can’t do that, you destroy it or destroy them.”

The country’s “conquerors” and founding fathers may have written the history books, Skenandore said, but they shouldn’t be allowed to control the narrative today. Their stay in Indian country was relatively brief, and they no longer walk the Earth.

She urged audience members to be aware and mindful of “the places of death, of life, of sacrifice, of prayer” around them and to consider these shared spaces “forums of tolerance.” As a society, she said, we must honor historic indigenous sites as cultural property with immeasurable value.

Skenandore, an expert in federal Indian law and tribal law, earned her bachelor’s degree from UW–Madison in 2001 in behavioral sciences and law, with a certificate in American Indian Studies. She earned her law degree in 2005 from the University of Denver Sturm College of Law.

Monday night, she wove the history of federal Indian law with personal anecdotes of cases she’s worked on, including ones that helped preserve indigenous sacred sites more than 10,000 years old.

She challenged audience members to not be “blindly led to perpetuate colonial domination.”

“We can choose well within our own individual sovereignty to be together and coexist,” she said.

“She did an excellent job of finding the balance between cultural ties when speaking of the mounds and sacred sites and the politics of tribal law and federal law and how the two subjects overlap,” said Monette, a member of the Turtle Mountain Ojibwe. “I also really appreciate her for challenging the audience throughout the lecture to do more research, to find the old documents that led to our oppression, and to visit sacred sites and feel their power.”

Lorenzo Gudino, a second-year law student at UW–Madison, said he was impressed both with Skenandore’s remarks and the turnout.

“These are people willing to take time out of their day to challenge their perceived notions of the university and the land,” said Gudino, a citizen of Fort Sill Apache. “They are leaving here tonight thinking more deeply about this place, about what has been lost, and about how they can be part of preserving Ho-Chunk history going forward.”