A framework for teaching middle school and high school students about slavery, developed by the Southern Poverty Law Center and launched Feb. 1, was inspired by and based on a book published by the University of Wisconsin Press in 2016.

A new report from the SPLC found a broad failure of textbooks, state standards and pedagogy to adequately address the role slavery played in the development of the United States — or how its legacies still influence us today. 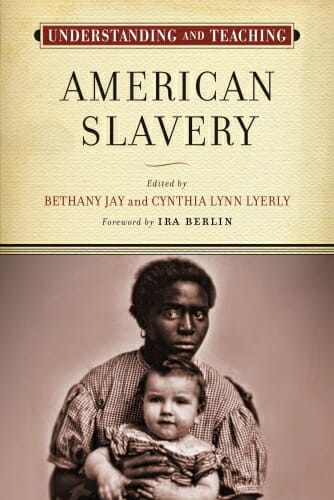 The framework, called Teaching Hard History: American Slavery, was developed by the SPLC and its Teaching Tolerance project based on UW Press’s Understanding and Teaching American Slavery, edited by Bethany Jay and Cynthia Lynn Lyerly. The book is aimed primarily at history teachers at the college and advanced secondary levels, but it lays out 10 key conceptsessential to teaching the topic at any level. The 10 concepts became the basis for the entire Teaching Hard History curriculum.

UW Press published the book as part of its Harvey Goldberg Series for Understanding and Teaching History, which aims to provide a deeper understanding of complex areas of history and tools to teach about them creatively and effectively. The series is named for Harvey Goldberg, a professor renowned for his history teaching at Oberlin College, Ohio State University and the University of Wisconsin from the 1960s to the 1980s. Goldberg is remembered for his commitment to helping students think critically about the past with the goal of creating a better future.

Other books published in the series to date focus on the Vietnam War; U.S. Lesbian, Gay, Bisexual and Transgender History; the Cold War; and the Age of Revolutions. Future topics will include volumes on teaching about the Holocaust, the civil rights movement, the modern Middle East, and Native American history.

UW Press is administratively located within UW–Madison’s Office of the Vice Chancellor for Research and Graduate Education.