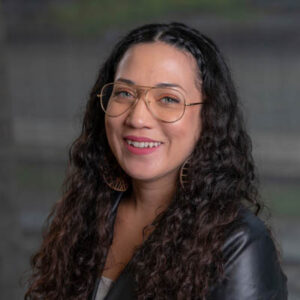 Sofía Snow is the director of the Office of Multicultural Arts Initiatives (OMAI) at UW–Madison, which administers the First Wave Hip Hop and Urban Arts Scholarship Program. An alumna of the inaugural cohort to graduate from the First Wave program, Snow is an interdisciplinary performing artist who is passionate about developing talented artists in higher education. Before returning to UW, she served as executive director of Urban Word NYC, one of the oldest and most comprehensive youth literary arts organizations in the U.S. First Wave is a nationally recognized program known for pushing the boundaries of poetry, dance, theater and art — the first and only program of its type in the country. First Wave scholars pursue their creative potential through a focus on three pillars: academics, activism and art. In addition to First Wave, OMAI houses a suite of innovative programs, including the Hip Hop in the Heartland educator training series, the annual Passing the Mic and Line Breaks festivals, and Madison’s longest-running all-age open mic event, Just Bust!