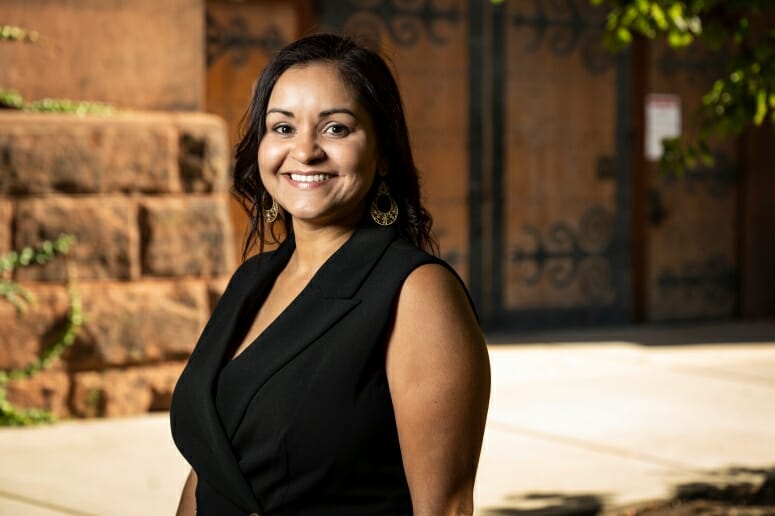 As an undergraduate at Wellesley College years ago, Claudia Guzmán says she felt like “a bit of an anomaly” — a first-generation college student from Wisconsin, educated in public schools, attending an elite East Coast private institution.

She struggled to find her place until joining a student organization for Latina students.

“It was those women who gave me a sense of belonging,” Guzmán says. “They looked out for me.”

Now, in her career in higher education, Guzmán says those formative experiences infuse her efforts to help college students find community. Guzmán began August 1 as an assistant dean and director of the Multicultural Student Center (MSC) at UW–Madison.

“I want the center to be a space where students of color can feel completely comfortable — a space where you can look around and see people who may have a similar lived experience as your own, and you don’t have to explain that,” Guzmán says.

Founded in 1988 and based at the Red Gym, the MSC and its affiliated cultural centers facilitate the academic life of students of color and develop activities to promote cultural identity and diversity.

“I’m excited to see the contributions Claudia will make to the MSC and to the broader campus,” says Associate Vice Chancellor for Student Affairs Gabe Javier, who oversees the areas of identity and inclusion. “She brings an amazing skill set: broad and deep knowledge of sociocultural programming, social justice, and diversity and inclusion efforts; a familiarity with both the state’s university system and nonprofit organizations; and an incredibly student-centered focus.”

Guzmán most recently served as the director of student life at UW–Green Bay. Prior to that, she managed sociocultural programs for the UW–Milwaukee Student Union, a role that earned her and her student staff the 2018 UW System Board of Regents Diversity Award. She previously served as an outreach specialist at the Roberto Hernández Center at UW–Milwaukee, as a lecturer in media writing at Marquette University, and as a development associate at La Causa Inc., a large nonprofit multicultural organization in Milwaukee.

Born and raised in Milwaukee, Guzmán says she scored well on college entrance exams and found herself in the fortunate position of being wooed by numerous universities. She selected Wellesley after touring the campus and feeling a strong pull. Yet the transition was difficult and she considered transferring. She says her story underscores the importance of students finding deep campus connections.

“The thing that really anchored me to the campus was Mezcla,” Guzmán says, referring to Wellesley’s Latina student organization. “They were very intentional from day one to reach out to Latina-identified students. The president and vice president took me under their wing. They would call me at night to make sure I was OK.”

Among her career highlights, she helped start the first emergency student grant program at UW–Milwaukee and helped launch a Latinx graduation banquet there. Partnering with student organizations, she helped bring major speakers to the UW–Milwaukee campus, including Kareem Abdul-Jabbar, LeVar Burton, and two of the three founders of the Black Lives Matter movement, Patrisse Cullors and Alicia Garza.

More than ever this year, Guzmán says it will be crucial that the MSC provide students of color with the services, supports and resources they need to succeed. The Black Lives Matter movement continues to lead national protests against police brutality and racial inequities. Other challenges for students include coronavirus-related bias against Asians and Asian-Americans and uncertainty around the status of the country’s Deferred Action for Childhood Arrivals (DACA) immigration policy.

“The MSC needs to be a safe space and a respite,” Guzmán says. “But it is also important that we affirm the students’ identities so that when they go back to other spaces on campus or in the community, they have a sense of self-confidence.”

Deeply rooted in community, Guzmán is a founding member of Latinas en Acción, a grassroots grantmaking fund developed for Latinas by Latinas through the Women’s Fund of Greater Milwaukee. She also is a founding co-programmer of Cine Sin Fronteras, the Latinx diaspora program of the Milwaukee Film Festival.

Outside of work, Guzmán enjoys hiking and camping and spending time with her extended family — she has five siblings and eight nieces and nephews. In Green Bay, she served on the board of directors of the United Way of Brown County. Earlier this year, the Green Bay Chamber of Commerce presented her with a “Future 15 Young Professional Award.”