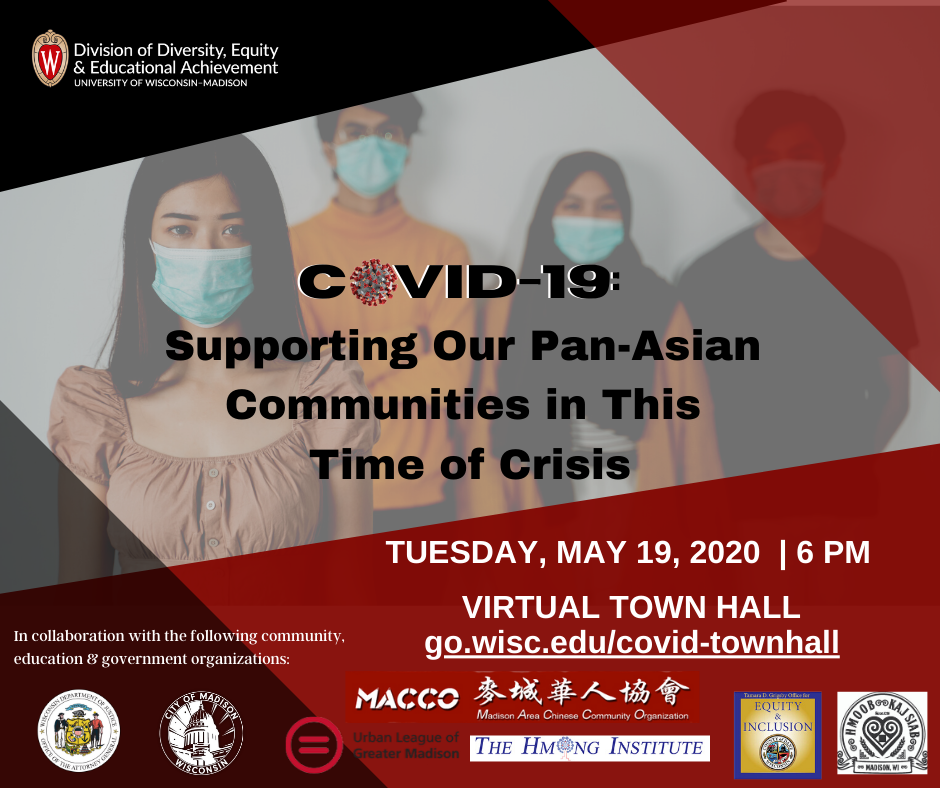 More than 200 campus and community participants joined Tuesday’s virtual townhall, COVID-19: Supporting our Pan-Asian Communities in this Time of Crisis.  For a list of shared sources of help, go to COVID-19 Resources.

Hosted by the UW-Madison Division of Diversity, Equity & Educational Achievement in partnership with community, education and government organizations, the discussion was a response to xenophobic and hateful attacks directed at people of Asian descent in Wisconsin during the COVID-19 crisis. Panelists let the community know they are supported in these unprecedented times and shared resources available through their organizations.

During the townhall, residents who have experienced situations of discrimination and feeling threatened because of their racial heritage, or presumed connections to China, provided candid testimonies. People of Asian descent report having strangers cough on or shout at them, notes and graffiti left on cars, hostile messages chalked on sidewalks, drivers who refuse them as paying ride customers, and even a stabbing in Milwaukee. Parents report the hostility has even affected their elementary age children.

“That is absolutely unacceptable,” said Patrick J. Sims, UW-Madison Deputy Vice Chancellor for Diversity and Inclusion. “Our campus and the Greater Madison community will not tolerate racist, xenophobic, or intimidating actions targeting community members of Asian descent — or for that matter — anyone based on race, ethnicity, religion, national origin or gender.”

The pattern of harassment and intimidation happening today is reminiscent of how African Americans were treated in the early 20th Century, Sims said, and the pattern resurges whenever people feel threatened. According to Jessica Boling of the Asian American Pacific Islander Coalition of Wisconsin, some 1,700 incidents against people of Asian descent have been reported nationally since the COVID-19 crisis.

“We have personally been experiencing many things we have never experienced before,” said Connie Li, president of the Madison Area Chinese Community Organization (MACCO).

Madison Neighborhood Resource Officer Tariq Saqqaf described having someone shout and swear at him while picking up a pizza. It was a jarring experience, he said.

“I’m wondering is this about what I look like? Is this about the color of my skin?” Saqqaf said. “Even with garbage like that, I fully know — I deeply know — this is my home. I belong here. That is the point of this evening. Even though the hate is out there, so is the love.”

Recent targeting began with stereotyping people of Asian descent, many of whom are not Chinese, community leaders say. This is especially problematic for the Hmong community, because of experiences in their recent past as war refugees in addition to cultural and language barriers, said The Hmong Institute Chief Executive Officer Peng Her. Elderly Hmong are particularly vulnerable during COVID-19 Safer at Home because they’re isolated, lack technology, and don’t know how to apply for help they deserve like unemployment.

“It is our intention in the city of Madison to make it as simple as possible to let us know what’s happening,” said City of Madison Director of Civil Rights Norman Davis.

Racist and traumatic experiences from physical intimidation and racial slurs to property damage need to be reported, either by the victim or conscientious bystanders, Davis said. Stereotyping and racial profiling are often the precursor to hate crimes, he added. The “Report a Problem” page on the Madison city website makes it easy to notify authorities. These reports are handled by a coalition of local enforcement agencies.

There is a range of offenses with increasing penalties from fines to felonies, including hate crime enhancers at the local and federal level, according to Kenith Bergeron, Senior Conciliation Specialist for the U.S. Department of Justice. Victims shouldn’t hesitate to report incidents because they’re not sure what type of offense has occurred; authorities will help determine the options.

Being targeted and blamed for a crisis is an unfortunate shared experience for people of color, said Ruben Anthony, President and Chief Executive Officer at the Urban League of Greater Madison.

“Disparities are exacerbated during a pandemic,” Anthony said, and the ongoing risks in public-facing jobs, crowded living conditions, and susceptibility to contagious illnesses can create an underlying tone of victim-blaming minority community members, he said. “We all need to stick together.”

“We need to be united with all ethnic groups,” Li said, adding that Chinese organizations are glad to know they are not alone. “This is a good opportunity for all of us to be united together and hold hands with all of you and try to make this a better society, a better future for us all.”

“This is our community that’s impacted. It’s not the so-called ‘Asian Community’. It’s our community, and people of Asian descent are part of our community, part of my community,” Rhodes-Conway said. “Together let’s build a community without hate, without fear, that embraces everyone.”