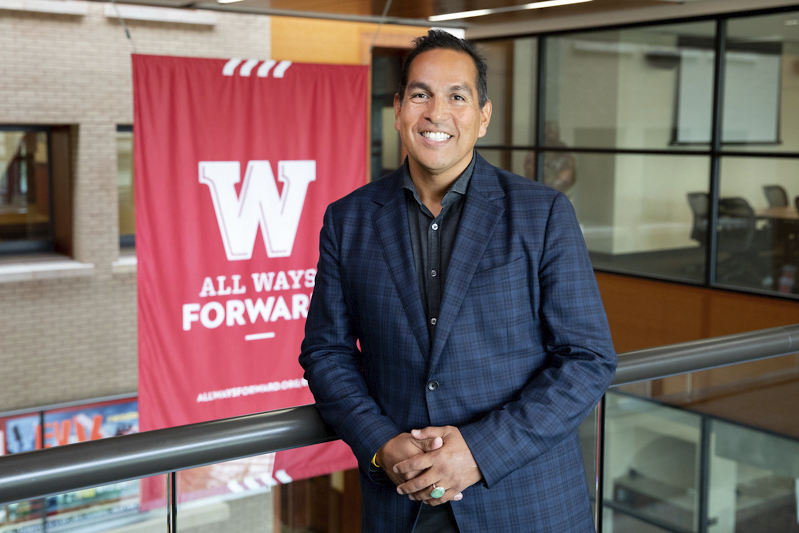 Aaron Bird Bear, a skilled administrator with extensive professional experience on Native Nations issues, has been named to the newly created full-time position of tribal relations director at the University of Wisconsin–Madison.

“Strengthening our relationships with the First Nations of Wisconsin is one of our highest priorities, and we are excited that someone of Aaron’s experience and knowledge has agreed to help us advance this effort in partnership with the American Indian nations and communities of Wisconsin,” says Chancellor Rebecca Blank. “Aaron is a recognized leader who brings to this role an acute awareness of the university’s history on Native issues and a deep understanding of the work that needs to be done.”Bird Bear, a UW–Madison alumnus, currently serves as the School of Education’s assistant dean for student diversity programs. In his new role, he will work to foster strong ties between the 12 First Nations of Wisconsin and the university and represent the UW–Madison Division of Extension leadership in collaborations with tribal communities. He will transition to his new role Nov. 1.

“I sincerely embrace the tenets of respect, revitalization and reconciliation forwarded by Indigenous scholars as I begin to collaborate on behalf of UW–Madison with the Native American nations and communities of Wisconsin.”  — Aaron Bird Bear

The position will be part of the Office of University Relations, which is responsible for building relationships with a variety of internal and external audiences including community organizations, business and industry, and elected officials in federal, state, local, and now tribal governments.

“We are pleased to be partnering with the Division of Extension in the creation of this new and important position,” says Ben Miller, assistant vice chancellor for government and corporate affairs. “Aaron is recognized as a partner and advocate by many tribal communities, and is someone who has previously provided critical leadership and guidance to university administrators on topics impacting our campus and the Native Nations of Wisconsin.”

Bird Bear, a citizen of the Mandan, Hidatsa & Diné nations (enrolled in the Three Affiliated Tribes of the Fort Berthold Reservation), earned a bachelor’s degree in physical oceanography from the University of Washington in Seattle in 1995 and a master’s degree in educational leadership and policy analysis from UW–Madison in 2010.

He came to UW–Madison in 2000 as the American Indian Student Academic Services coordinator in the College of Letters & Science. Since 2009, he has worked in the School of Education, most recently as an assistant dean responsible for leadership around recruiting, supporting and retaining historically underrepresented undergraduate and graduate students. His role as an assistant dean has included overseeing the College Access Program for high school students and the American Indian Curriculum Services unit, which coordinates the school’s efforts to integrate American Indian studies into teacher education programs.

In 2003, Bird Bear helped develop the First Nations Cultural Landscape Tour, a place-based, experiential education tour of American Indian landmarks on the UW–Madison campus. He currently co-leads a group that is creating signs honoring the Native presence on campus, including the new “Our Shared Future” marker on Bascom Hill that recognizes the land as the ancestral home of the Ho-Chunk.

“My interest in this position comes from my deep admiration of the 12 First Nations of Wisconsin and my belief in the Wisconsin Idea and the transformational power of the University of Wisconsin–Madison,” Bird Bear says. “I sincerely embrace the tenets of respect, revitalization and reconciliation forwarded by Indigenous scholars as I begin to collaborate on behalf of UW–Madison with the Native American nations and communities of Wisconsin.”