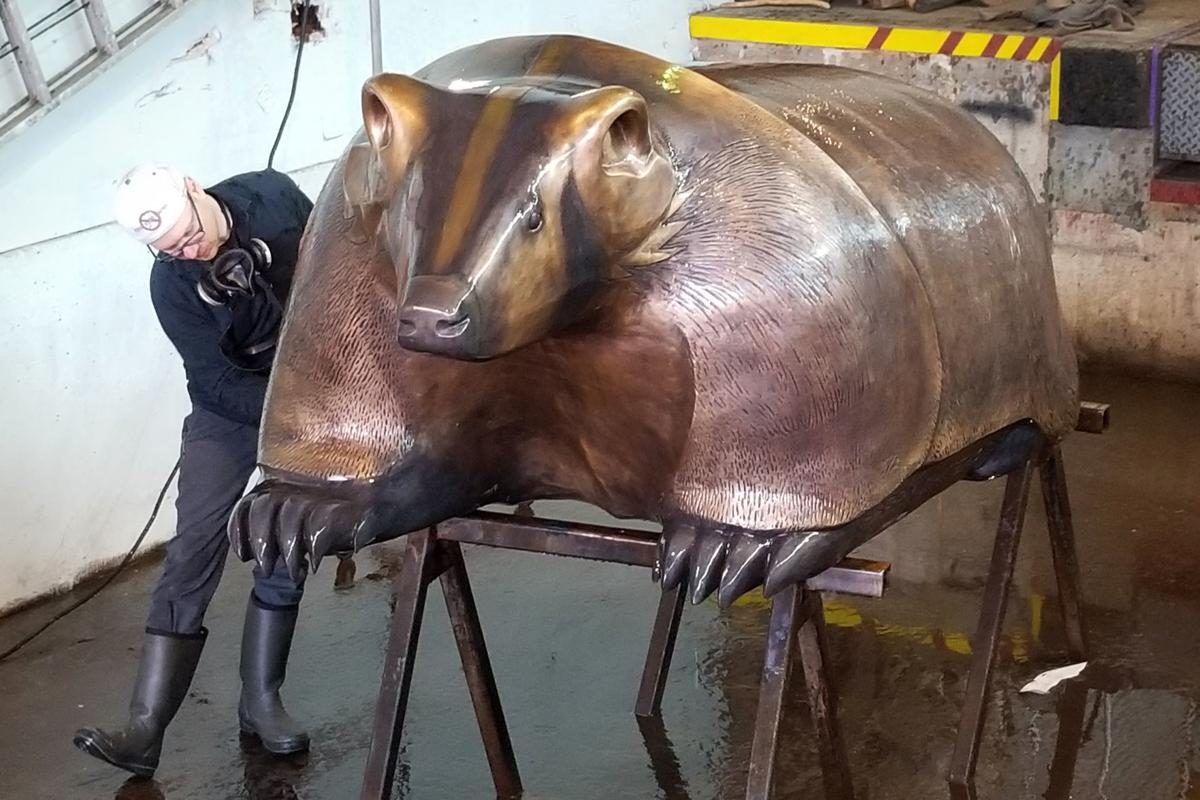 A new Badger is coming to town this August.

Across the street from Camp Randall Stadium on Monroe Street, a 10-foot-long bronze statue of a badger — that people will be able to touch and sit on top of — is set to be installed Aug. 21.

Aptly called “The Badger,” the statue is a realistic likeness of the animal, rather than the more cartoonish look of University of Wisconsin mascot Bucky Badger. It has claws, a pointed nose, dark eyes and a fur texture cast in shiny bronze.

The statue will be on city property across the street from the location of the “Nails’ Tales” sculpture, which is being removed this summer after years of criticism for resembling an ear of corn or male anatomy.

Whitehorse is known for his “Effigy Tree” carving, located on the Near East Side at Lakeland and Maple avenues along Lake Monona. He worked with wood, metal, paint and even snow. One of Whitehorse’s staples was making art that people could interact with.

“His philosophy of art was he wanted people to be able to touch it — to be able to interact and enjoy art and not consider it something to put on a pedestal out of reach,” said his wife, Deb Whitehorse. “He made this Badger with that in mind.”

The badger’s back is wide and almost flat, so it will be easy for children, college students and others to climb on the statue and sit on it for photos. The city created a rubber membrane for underneath the statue in case someone slides off of it, Whitehorse said.

“I look forward to maybe on a game day kind of going up there, standing back and watching how people interact with it as they file into the stadium,” Whitehorse said. “I imagine I’ll see people getting their pictures taken with it, kids hugging it, things like that.”

Whitehorse said her husband made the model for the statue about 10 years ago, but only recently was she able to secure a public location for it after working with friends and the city to find it a home.

“The badger has been in our shop for all these years,” Whitehorse said. “I’m beyond excited and so happy that it’s going to be installed on Monroe Street where Madisonians and people will enjoy it for generations.”

Vanguard Sculpture Services, an art foundry located in Milwaukee, cast the model Harry Whitehorse made in bronze and completed the finishing touches on the statue, such as darkening parts of the bronze to give the animal its classic badger stripes.

Whitehorse said Vanguard’s staff had worked with her husband before, so they understood his intentions and were true to his vision for the statute.

She said she is proud to have one of her husband’s works of art displayed in such a prominent location in Madison.

“I just feel really good about being able to continue to share Harry’s gifts,” she said.

A dedication ceremony for the statue that will acknowledge Harry Whitehorse, the statue and the community has been tentatively set for Sept. 13.