The Ojibwe people tell of a prophecy that spurred their journey from the Atlantic coast of North America to the Great Lakes region more than 1,000 years ago — revelations that told them to travel west to a land where food grew on the water.

That food? Wild rice, or “manoomin” to the Native American nations that, like the Ojibwe, comprise the broader group of Anishinaabe tribes in the Upper Midwest and Canada.

But manoomin is much more than just a crop to these tribes and others. It represents their connection to nature and holds profound spiritual significance as a gift from their creator. The Menominee Tribe’s name literally translates to “wild rice people.”

“It permeates all aspects of their cultures,” says Sarah Dance, a graduate student in the University of Wisconsin–Madison College of Engineering who’s working on a project to build connections between the university and Native American tribes around wild rice protection and restoration efforts. 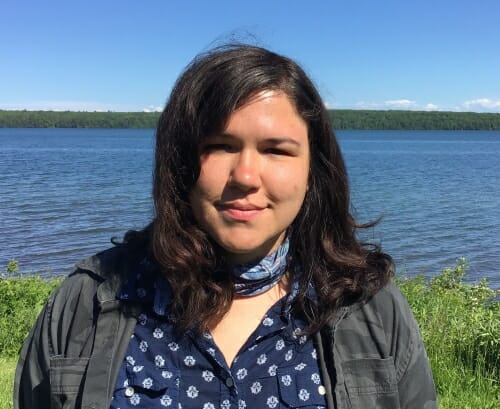 Dance, a member of the Lumbee Tribe of North Carolina and a doctoral student in the Department of Civil and Environmental Engineering, received a Baldwin Wisconsin Idea Grant to support her project, which will span three growing seasons.

A 2011 study by researchers at UW–Madison’s Nelson Institute for Environmental Studies showed the number of watersheds with wild rice in Wisconsin and neighboring Minnesota had declined 32 percent since 1900. Southern Wisconsin, in particular, has become barren.

Research from the University of Minnesota has illustrated the harmful role of sulfide in the soil beneath wild rice waterways — a key consideration given the prospect of several potential mines in Wisconsin and Michigan’s Upper Peninsula and state legislation in 2017 that eased Wisconsin’s sulfide mining restrictions.

By testing water quality, studying sediment and conducting bucket experiments that will simulate a range of environmental conditions, Dance hopes to develop site-specific recommendations in partnership with her collaborators from the Lac du Flambeau and Lac Courte Oreilles tribes.

“I think Sarah’s project really is a good opportunity for the university to start building a better relationship, partnership with tribes.”

“Native people already know the water quality issues in the area that are impacting manoomin survival and growth, and the university has this wealth of resources that can look at some of those conditions,” says Dance, who has worked on a wild rice outreach and education toolkit as part of a Wisconsin Sea Grant project. “We found that there are all of these really small efforts out there and they’re not well connected to one another. Our hope is that the research we’re doing can push the needle forward on creating some best practices and sharing those across all those different entities.”

Dance views building those connections between tribal and university researchers and instilling trust as paramount to the effort. The two sides will work together to identify the testing sites and design the experiments, and Dance hopes to hand off leadership of the project to the tribes. William “Joe” Graveen, a wild rice technician in the Lac du Flambeau Tribe’s wild rice cultural enhancement program, says he hopes the project will spur more research — at UW–Madison and other UW System schools — into the manoomin conditions in the state.

“I think Sarah’s project really is a good opportunity for the university to start building a better relationship, partnership with tribes,” he says. “I think that’s kind of the missing piece.”

Dance is also planning to hire Native American students as summer interns, giving them the sort of experience she had working on environmental research with her own tribe as an undergraduate at North Carolina State University. When she was weighing graduate schools, she looked for a place that would allow her to connect with Native American tribes on collaborative research. She’s found that in civil and environmental engineering Professor Matthew Ginder-Vogel’s lab.

“I’m hoping to spark an interest in pursuing science and to help improve Native American representation in STEM (science, technology, engineering and math) by creating this space for students to pursue research that aligns with their identity and what they want to do for their communities while also having the academic and rigorous aspects,” Dance says. “You don’t have to turn your back on your community or pursue something that doesn’t align with your ideals.”

Story by By Tom Ziemer