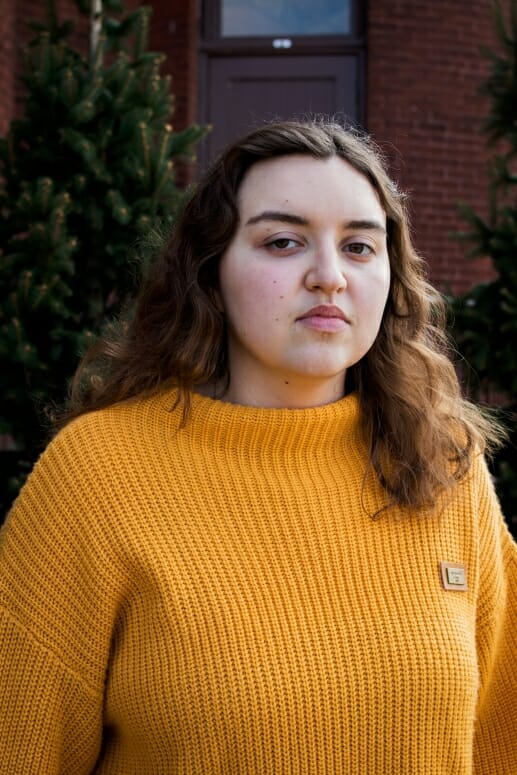 Mackenzie Berry, a recent UW–Madison graduate whose work has explored topics ranging from Muhammad Ali’s influence on hip hop to health-care access in Kentucky, has been awarded a top national fellowship to continue her studies.

Berry is the recipient of a $20,000 Marcus L. Urann Fellowship from The Honor Society of Phi Kappa Phi, the nation’s oldest and most selective collegiate honor society for all academic disciplines. She is one of only six recipients nationwide this year to receive the fellowship, named for the society’s founder.

Berry plans to pursue a master’s degree in race, media and social justice at Goldsmiths, University of London.

The program at Goldsmiths is known for its creativity and innovation, Berry says. That will help her pursue what she calls “the messy work of seeking equity for marginalized groups in humanizing and feasible ways.”

“I definitely want to be a writer and a poet and, in addition to that, do organizing work, whether that’s paid or unpaid labor,” she says. “I want to have the critical understanding to be ethical, strategic and effective on the grassroots level.”

A native of Louisville, Kentucky, Berry earned a bachelor’s degree in May from UW–Madison in English and creative writing, with a certificate in Afro-American studies. This summer, she is interning in New Orleans with the Center for Ethical Living and Social Justice Renewal. She will begin her graduate work at Goldsmiths this fall.

At UW–Madison, she was a scholar in the First Wave Hip Hop and Urban Arts Program. The groundbreaking program brings together talented students from across the country to pursue art, activism and academics.

“First Wave is pretty much the reason I came to UW–Madison,” Berry says. “I’m so grateful for the experiences it gave me, the people I met because of it, and the framing I learned through it. The university as a whole provided me with so many resources to do independent projects. I’ll always be appreciative of that.”

In her hometown, Berry was the founder and executive director of Young Poets of Louisville, a nonprofit organization that provides writing workshops, poetry slams and funding for poetry projects for youth ages 13-19.

At UW–Madison, she produced and co-edited “Louisville Lip: MC Muhammad Ali,” a full-length documentary about the legendary boxer’s contributions to hip hop and how black women shaped hip hop and Ali. The documentary posits that Ali should get credit for being hip hop’s first “Master of Ceremonies,” or MC. Berry interviewed more than 20 subjects for the film, including members of Ali’s family and Darryl McDaniels (DMC) of Run-DMC.

Berry also created a podcast series titled, “Word to Wellness: Health Access in Kentucky from Smoketown to Jackson,” which sought to develop new insights into Kentuckians’ narratives of health access. The work was supported by a summer internship award from the UW–Madison Division of Diversity, Equity and Educational Achievement and a summer research award from Phi Kappa Phi.

Other campus efforts found her translating poems written in Pashto into English, addressing mass incarceration and mental health through a community arts project, and co-founding and co-directing the UpRise Poetry Collective.

“Many people have poured into me and invested in me on my journey, from coaches to teachers to people I met at the bus stop,” Berry says. “For that, I’m immensely grateful.”