As a high school student, Talithia Williams was intrigued and a little surprised when her high school AP calculus teacher pulled her aside and said, “Have you thought about majoring in math when you go to college?”

“I wasn’t a star student,” Williams told a capacity crowd of 700 at Wednesday’s campus Diversity Forum. “Why would he tell me that?”

To laughter, she said she knew only one college math major who was black — Dwayne Wayne, a character on the sitcom “A Different World.”

What really struck her about her teacher’s comment was the way he phrased it, she said.

Williams is now a mathematics professor at Harvey Mudd College in Claremont, California, and a prominent advocate for engaging more people from underrepresented groups in science, technology, engineering and math — the so-called STEM fields. She co-hosts the TV series “NOVA Wonders” on PBS.

During her keynote address Wednesday, she wove stories from her journey as a woman of color in a STEM field with practical advice from her experiences at Harvey Mudd College.

“We had to be really intentional to diversify our campus,” she said.

She and a small group of fellow faculty members volunteered to call and email every non-white, non-Asian student who got accepted, offering themselves as resources for the students and their parents, she said. The campus developed a student-faculty mentor program to create community for students of color outside the classroom. 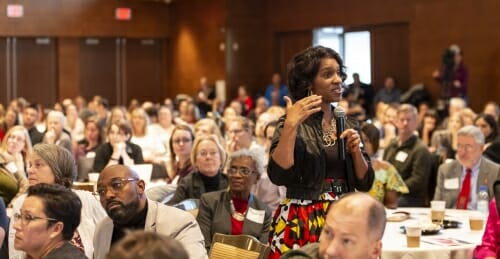 “It’s important that they feel like they have access to faculty,” she said. “Is this an extra job? Absolutely, and I make sure to let (the college leadership) know — ‘Here, let me text you a picture of the students who were at my house last night’ — because this is work my colleagues aren’t necessarily doing.”

Harvey Mudd College has rethought its faculty promotion guidelines to include diversity and inclusiveness work as valuable to the institution and a component of tenure considerations, she said.

Prospective job candidates at the college are asked to respond to a scenario about diversity. Their responses are rated from 1 (low) to 5 (high) based on previously agreed-upon criteria.

The high school AP calculus teacher who inspired her happened to be a white male, she said.

During a panel discussion that followed, UW–Madison senior Kent Mok and recent graduate Miona Grae Short both spoke of the crucial role mentors and a sense of community have played in their college experiences.

Mok, a native of the Philippines, said he found mentors and peer support at UW–Madison through the Posse scholarship program, which identifies public high school students with extraordinary academic and leadership potential who may be overlooked by traditional college selection processes.

Especially as a new student, Mok said Posse gatherings allowed him to discuss sensitive issues as a student of color on a predominantly white campus with fellow students who understood him.

“They are able to validate your experiences,” said Mok, a neurobiology and French major and a Hilldale Research Fellow for the Wisconsin Institute of Medical Research.

Short said she “met some of the best human beings in the world” through UW–Madison’s First Wave Learning Community, a scholarship program focused on spoken-word and hip-hop culture. She is a spoken-word artist who, in May of this year, became the first black woman to earn an undergraduate degree in astrophysics from UW–Madison. She is now a research assistant at the Harvard-Smithsonian Center for Astrophysics.

She encouraged faculty members to think in terms of not just instilling confidence in students but also in making sure they aren’t subtly undermining that confidence. Sometimes it was the people with the best intentions who broke her spirit the most, she said.

She mentioned one example related to her activism on campus around issues of race and policing. A professor had noted this activism and, concerned it might be distracting from her schoolwork, emailed her.

“His encouragement was trying to tell me, ‘I get what you’re trying to do, but focus first on graduating and maybe you can just be a black scientist that other black people can look up to, and that might just be enough,’” Short said.

While well-intentioned, the comment was “extremely unhelpful,” she said.

The Diversity Forum is the signature event of the Division of Diversity, Equity and Educational Achievement.

“It builds capacity around diversity and inclusion and enables each of us to grow in our personal and professional journeys as members of a broader community,” Patrick Sims, deputy vice chancellor and chief diversity officer, said in welcoming people to the forum.

The second day of the Diversity Forum on Thursday will feature 11 breakout sessions covering issues on campus such as mental health, sexual assault, drinking, community policing, and inclusive practices to support transgender people and gender diversity. Registration is still open for Thursday, or watch an archived livestream of Wednesday’s events. It’s free and open to all. Join the conversation at #UWDiversityForum.