Skip to main content
University of Wisconsin–Madison
By Doug Erickson

Michelle Navarro, left, Riley Tsang, center, and Alondra Avitia are among the UW–Madison students whose hard work and passion have led to the creation of two new cultural center startup spaces at the Red Gym. The spaces will be supported by the Multicultural Student Center, also housed at the Red Gym. (Photo by Beeki Gurung)

Alondra Avitia remembers touring the University of Wisconsin–Madison as a high school freshman and searching for signs she’d fit in as a Latina on a predominantly white campus.

Six years later, Avitia is now a UW–Madison junior and helping to make that task easier for others. She’s among a group of students whose passion and hard work have led to the creation of two new cultural center startup spaces on campus.

The Latinx Cultural Center and the Asian Pacific Islander Desi American (APIDA) Cultural Center will open this fall on the North Mezzanine of the Red Gym, 716 Langdon St. (The term “Desi” refers to those who identify as South Asian or have a South Asian heritage. It includes the countries of Pakistan, India, Bangladesh, Nepal and Sri Lanka and sometimes Afghanistan, Bhutan and Tibet.)

Both new startup spaces will be supported by the Multicultural Student Center(MSC), also housed at the Red Gym. The MSC is one of nine student-focused departments in the Division of Student Life.

“I want all high school students to feel that if they come here, they belong here,” says Avitia, an international studies and political science major from Addison, Illinois. “You want to feel that sense of belonging the minute you set foot on a campus.”

“The ability to find a group of people to call family is an important survival mechanism for students of color on campus,” says senior Riley Tsang, a social welfare major from Brookfield, Wisconsin. “Cultural centers provide the structure and the resources to find that family.”

Tsang and recent graduate Shannon Thao began actively lobbying for an APIDA Cultural Center more than a year ago. They put together a committee of like-minded students, tapped staff and faculty expertise, researched cultural centers at other Big Ten schools and developed a proposal.

“We decided that if we wanted a Latinx Cultural Center on campus, we shouldn’t wait around for someone else to do it,” says Navarro, a junior journalism major from Chicago.

The Latinx students were aware of the work already being done to create an APIDA Cultural Center. The two groups began collaborating and successfully presented their proposals together to a group of university officials that included then-Dean of Students Lori Berquam and Patrick Sims, deputy vice chancellor and chief diversity officer. Students from the American Indian Student & Cultural Center joined them for the meeting in a show of solidarity and to advocate for their own future needs.

“We used the momentum of each other’s projects to build on our individual efforts,” Tsang says.

Each new cultural center will be about 600 square feet. Currently, the space has been used mostly by Red Gym departments and affiliated students.

“Cultural centers are vital spaces where students of color can explore their racial/ethnic identities and how that identity is a piece of their overall experience,” says MSC Director Gabe Javier, an assistant dean of students. “The intent of these spaces is not to segregate people, but to give students a chance to learn about themselves en route to learning with and about others.”

Remodeling of the spaces is slated to begin in January, with a grand opening in the spring. However, students plan to begin using the spaces for cultural events as soon as furniture arrives in a few weeks. (They hope to hold some events for Latinx Heritage Month, Sept. 15-Oct. 15, in the new space.)

The students say it’s important that the new cultural centers be thought of as startup spaces, not finished products. They have many ideas for growth.

“We look at this almost as interim space,” Navarro says. “We want to prove to the administration that we will use the space and that we deserve larger space and funding for a professional staff.”

For the 2018-19 school year, each new cultural center will be staffed by a student intern called a campus community organizer, with MSC professional staff assisting and helping to oversee the centers. A third campus community organizer position, also new this fall, will be based at the MSC and will partner on programming with Native American student organizations and the American Indian Student & Cultural Center.

Tsang says a common question he and other students get asked is why the cultural centers are needed when there’s already a multicultural student center.

“The two are in no way mutually exclusive — they complement each other,” he says. “The MSC exists as a place for all students of color to find resources and community. The cultural centers show that the university is devoting resources for more specific identity development, education and empowerment.”

Cultural centers also provide crucial space to honor alumni whose voices and accomplishments may have been minimized or overlooked, Avitia says. The Black Cultural Center has been an inspiring example both in the way it lifts up minority alumni voices and more generally in how it undertakes its mission, she says. Karla Foster, MSC assistant director of cultural programming, has been advising the students.

“I am extremely amazed and impressed at the work these students are doing,” Foster says. “It’s wonderful to see them learning from their peers and then using that knowledge to serve their own community members and to build coalitions among the respective student populations.”

As the opening of the new cultural centers nears, the reality is starting to sink in for the students.

“I’m really excited and, honestly, a little awed with the responsibility we’ve been given to shape this,” Tsang says. “We are not taking that responsibility lightly.” 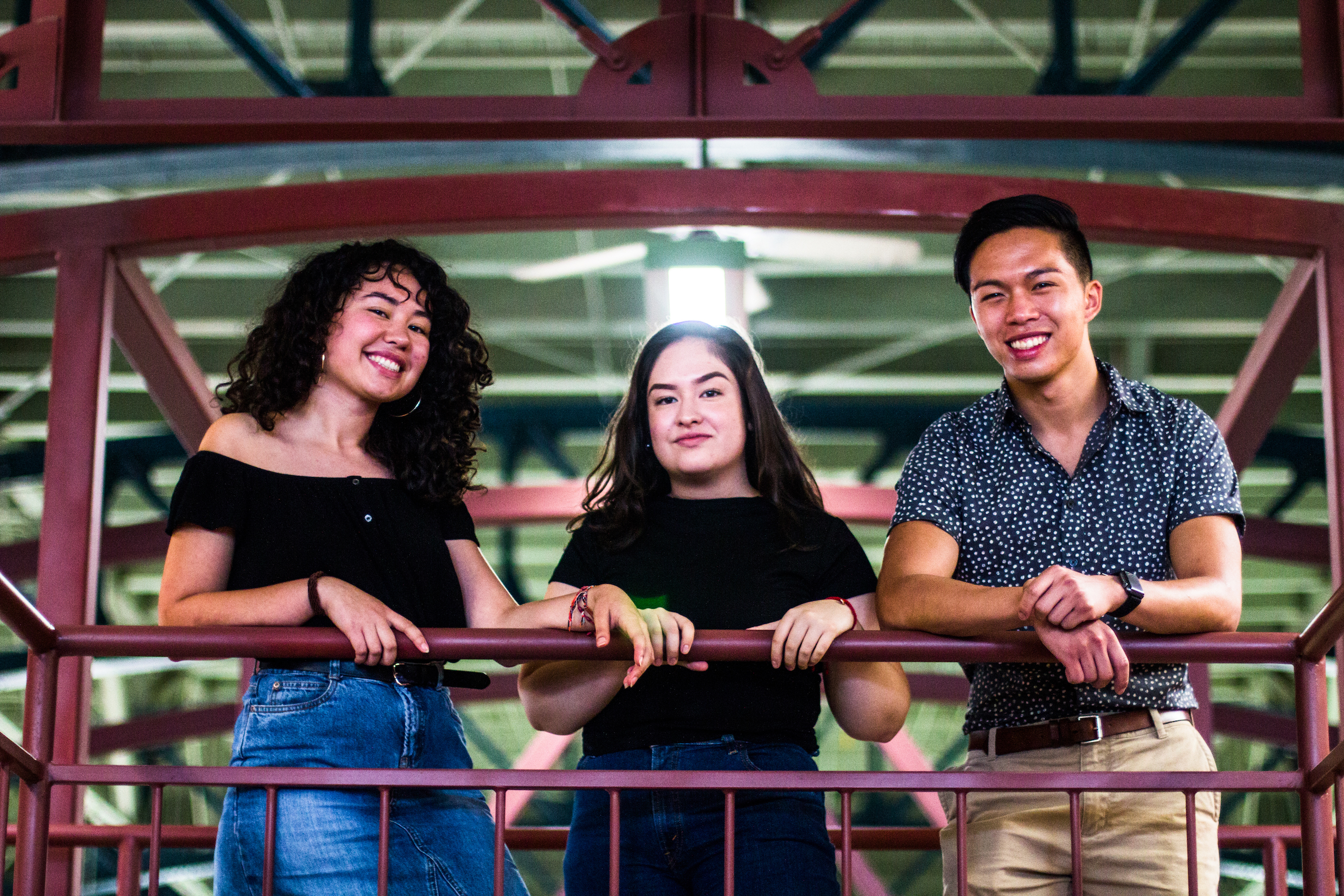 The Latinx Cultural Center and the Asian Pacific Islander Desi American (APIDA) Cultural Center will open this fall on the North Mezzanine of the Red Gym. Pictured on the mezzanine are students Alondra Avitia, left, Michelle Navarro, center, and Riley Tsang. BEEKI GURUNG