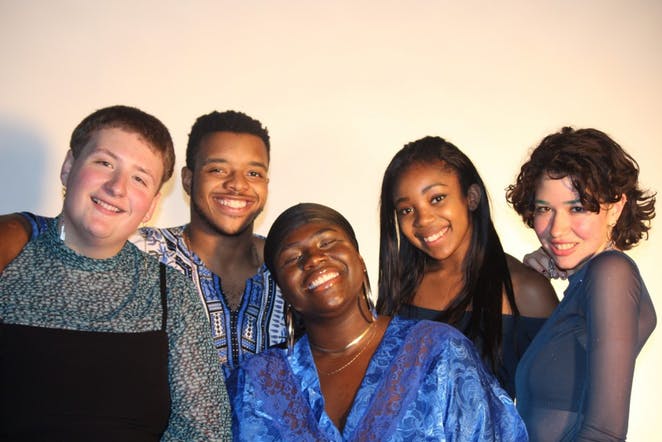 Members of the UpRise Poetry Collective will practice for hours to prepare themselves for a massive competition of more than a hundred students from universities across the nation. UpRise is a registered student organization at the UW that brings together student poets to compete in poetry slams on behalf of the UW. In a month, several of its students will travel to Houston for the 19th annual College Unions Poetry Slam Invitational (CUPSI) to take the stage, some for the first time. Anticipating the adrenaline rush, the team must rehearse their pieces for hours.

“On the team this year is Duncan Slagle [x’20], Nile Lansana [x’21], Isha Camara [x’21], Ayomi Obuseh [x’22], and Emma Rachum [x’21],” says UpRise’s codirector Mackenzie Berry x’21. “We have three returning poets who competed at CUPSI last year and two new poets who are non–First Wave, which we are excited about because our aim is to reach the campus at large.” Most of UpRise’s participants are also scholars of First Wave, a hip-hop scholarship program through the Office of Multicultural Arts Initiatives.

UpRise’s slam team is coached by Mikey Cody Apollo, a Milwaukee poet and author of Black Girls, Silence, and Other Things Made of Gold. Penda Smith x’21 and Berry are codirectors, and Onam Lansana x’22 serves as the group’s operations manager. He handles all of the logistics of organizing the trip and ensuring everything runs smoothly.

“I expect for us to go down to Houston and absolutely kill it,” says Nile Lansana x’21 “I expect us to share our truth, be powerful, creative, and hold nothing back, but I also expect us to build connections.”  The team took 6th Place in the World at the competition.

He competed on the team last year. Lansana, like others on the team, is no stranger to the competitive slam and open mic world. He participated in the Louder Than a Bomb festival in 2015 and went to the Brave New Voices International Youth Poetry Slam Festival in 2016. Lansana is also a First Wave scholar. “I’ve been doing slam and poetry since I was 10. I’ve been around the arts my whole life. My mom’s a storyteller; my dad’s a poet,” he says.

UpRise Poetry Collective entered the collegiate slam environment for the first time last year. Some students from First Wave had coordinated a team in the past, but the group lost momentum and became inactive about six years ago. Smith and Berry, both members of the 10th cohort of First Wave scholars, decided to form the collective as a registered student organization in 2018 so it could host slams, writing workshops, and raise money to send poets to CUPSI to compete. The collective also collaborates with other organizations such as Melanin Speaking, First Wave, the JVN Project, and POWER Collective.

“Although the primary reason for forming UpRise was initially CUPSI, from the beginning we have always wanted to expand beyond the competition and offer more writing workshops and poetry readings for the campus at large to develop a community of poets on campus,” Berry says.

UpRise offers more intimate practices for the poets who qualify to compete at CUPSI. Berry says the CUPSI team is coached each year to provide guidance, critique, and focus, and team members also critique each other’s work and performances.

Obuseh found her way to the group — and eventually the team — after attending some of the group’s public events. She says participating in UpRise’s events allowed her to interact more with the multicultural community on campus. “My friend was actually competing, and I decided to compete for the second qualifying round,” she says. Obuseh also says she would have never done an open mic without the confidence boost UpRise gave her. She participated in forensics speech and debate competitions in high school; however, she says the slam environment is completely different. “The other day, someone pushed me, and I just started rapping,” she says.

Nile Lansana and Obuseh both describe the slam and open mic scene as an accepting environment, a community. Obuseh says she is excited to go to Texas for the first time and meet some of the viral poets she grew up watching on social media. She also says seeing people of color be powerful in what they do is refreshing.

Nile Lansana says participating on last year’s team was an amazing experience. He enjoyed making chants, wearing team shirts, and bonding as a team. He still texts and shares poems with former members who have graduated.

“The work and the process of being able to work with each other is incredible, and I wouldn’t trade it for anything,” Lansana says.

Obuseh says UpRise helped develop her writing, learning how to use a different tone or piece. The group practices twice a week for a total of five hours, and some members meet outside of practice time to work on group poems with each other or to write individual poems to bring to practice.

“However, in the two weeks before CUPSI, it will be all hands on deck with practices several times a week until all poems are as they should be,” Berry says.

Before rehearsing pieces, the group spends a lot of time writing and editing. It is often said that there is no perfect piece and that no poem is ever finished. For Berry, a piece is ready when it feels right which is different for every person, and, in a sense, there is no such thing as “the perfect piece.”

For their purposes, a piece is finished from a writing perspective when it has been critiqued, transformed, and fine-tuned. That doesn’t mean it’s ready for prime time, though. A piece isn’t ready to be performed until someone, or a group of people, can perform the piece several times with no errors and with high energy. Berry says a piece is ready to be performed when it is “in your body.”

“As a collective, the team set the goal that we were not aiming to win the competition,” says Berry, “but that we wanted to tell our stories and represent them authentically and masterfully.”